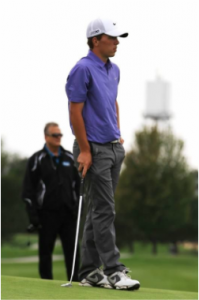 Drew Lunt placed first in the Boys 14-19 division.  Drew shot a first round score of level par 72, leaving him in the lead by 1 stroke going into round 2.  Drew posted a great second round of 66 and he won by almost 10 strokes.  Throughout the weekend, Drew signed for a two day total of 10 birdies and an eagle. This was his first win of the season and earned him a spot in the Tournament of Champions and North American Junior Amateur Championship. Drew attributed his great play to staying in the process one shot at a time and not getting ahead of himself. He said his goal was to be patient and have a great attitude.  He accomplished both!!!! Well done Drew.

In the Boys 12-13 age group, Paul Weyland golf student Connor Mahoney posted a first round of two under par 70 with 5 birdies. This had him tied for first after round 1 with Jake Slocum, another fine player of the Paul Weyland Golf Junior Academy Strive for Excellence program.  A second round 73 by Connor Mahoney was enough to propel him to the outright lead and take the title over Jake Slocum who came close behind to take second place.  The rounds of 70 on the first day posted by both Connor and Jake were their best rounds of the year.  These two kids are getting very good fast, and this tournament helped them both realize how good they really are.

The Girls 15-19 Division was led by Paul Weyland Golf student Payton Fehringer the entire weekend. A first round of 82 left her in front of the pack by a few strokes moving into round two. Payton’s second round of 80 earned her the title of the event with the prestigious honor of being invited to the North America Junior Amateur.  I am so proud of Payton.  Even when she does not have her best golf she loves the game and maintains a great attitude. She understands that junior golf is about the process of learning something at every tournament and getting better every day.  Well done Payton!!!