Drew and Justin, both seniors at Skyview High School in Nampa, Idaho, played in the 4A District III boys district championship tournament and both finished T1 (70) along with two other players.  Although Drew and Justin both birdied the first hole in a four way playoff, it wasn’t quite enough to beat a former State high school champion.  But I’m incredibly proud of Drew who got second place and Justin third.

Carson Barry, a freshman at Rocky Mountain High School in Meridian, Idaho, played in the 5A District III boys district championship tournament and finished 6th with a 72.

Natalie Mullins, a senior who plays golf for Eagle High School in Eagle, Idaho, played in the 5A District III girl’s district championship tournament, placed 4th with a 79.

Drew, Justin, Carson, and Natalie will all be representing their high school teams at the State championship tournament on Monday.  Good luck to all! 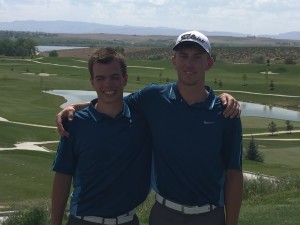