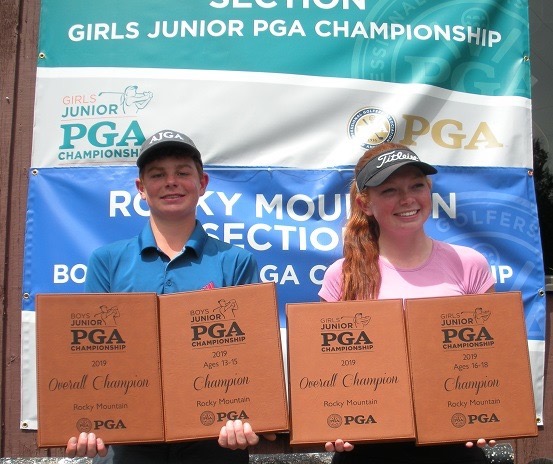 A big congratulations to Carly and Zach Carter for winning the overall Girl’s and Boy’s Divisions of the 2019 Rocky Mountain Section PGA Junior Championship!

Carly and Zach will be playing in their respective PGA Junior National Championships. They may be the first siblings ever to qualify at the same time.

After a first round of even par 72 Carly had a 5 shot lead. She faced some adversity during her final round but played her last three holes 1 under par to post a 74 good enough for a three shot victory.

Zach, who is only 14 years old, posted first round 2 under par 70 and was tied for the lead. After enduring some poor putting and being 3 over par after 9 holes was 5 shots from the lead when he told himself to stay in the process and stick to his plan. This resulted in 3 birdies and only one bogey on his back nine, and he made up all 5 shots to tie for first. Zach won with a birdie on the first playoff hole.

So proud of both these kids. They are learning and getting better every day!