Congratulations to Jake Slocum for qualifying for the 2019 IMG Academy World Junior Championship. This year the Idaho Golf Association made the championship qualifier 36 holes. Jake posted 68-72 for second place and qualifying to play in the Junior World Championship Boys 15-18 division.

Jake is an outstanding junior golfer. Congratulations to him for qualifying this year!

I’ve been coaching Jake, since he was in the 6th grade.  I’ve enjoyed watching him reach his goals in golf.  This year brought new challenges that Jake has never faced before.  As a freshman and sophomore Jake’s team had players who had already committed to playing on top men’s NCAA Division 1 golf teams.  Jake was always good, but he wasn’t expected to win.

This year was different.  Jake is the best junior golfer in the state.  Jake’s peers, his parents, his team, and he himself expected him to win.  Not all players know how to handle this pressure, and stress and tension can get into their game.  Jake had never experienced this kind of pressure before.  He chose to believe in himself, and he won.

Jake has worked very hard and met his goal of committing to play for a top men’s NCAA Division 1 golf program at Iowa State University.  I hope Jake realizes his accomplishments and takes the time to enjoy this summer’s golf season.  I hope he plays free.  I hope he plays for the love of the game. 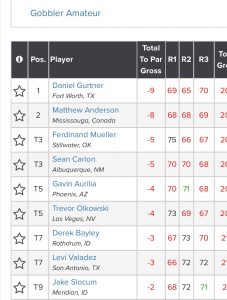 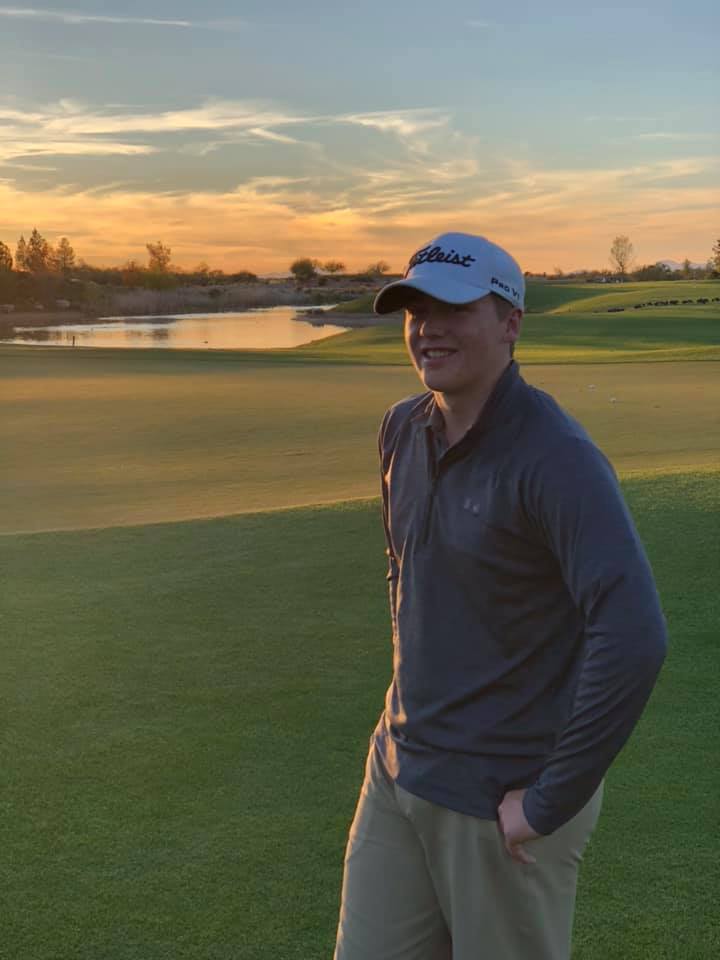 Jake is 16 years old.  This was not a tournament for junior golfers.  This was an event for the top collegiate golfers and amateurs from across the country. There were a total of 38 universities represented in the field.

Jake is building confidence and getting better every day. When he starts playing at Iowa State in two years he will have total belief and confidence that he can he can play and compete with anyone.

This kind of self-belief is essential for a junior golfer to achieve this kind of success. It’s my job to not only teach golf but instill self-belief and self-confidence in these young players.  Jake works harder on the correct things than anyone I know, and it’s really paying off.  Well done Jake!!! 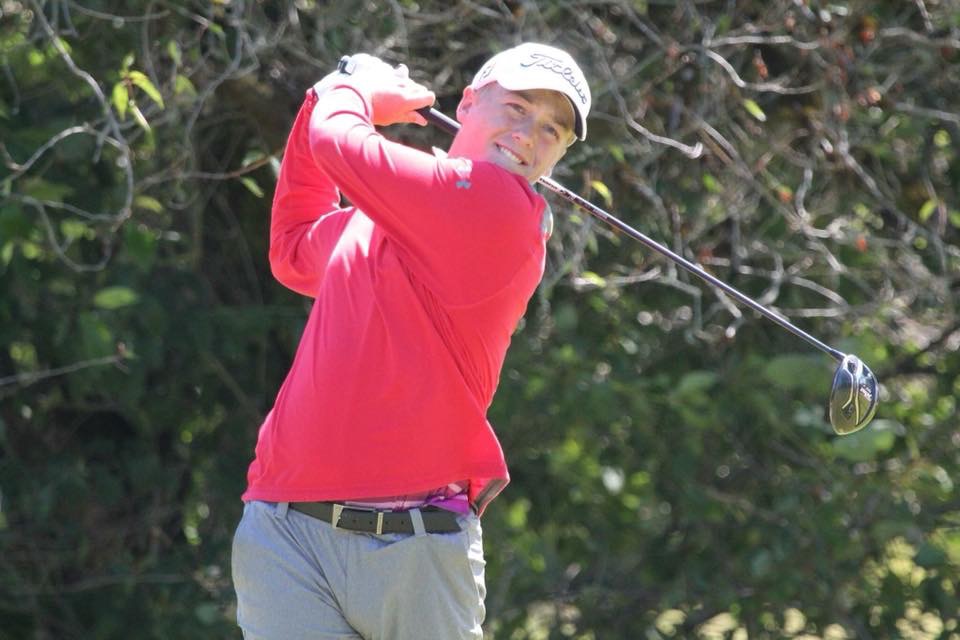 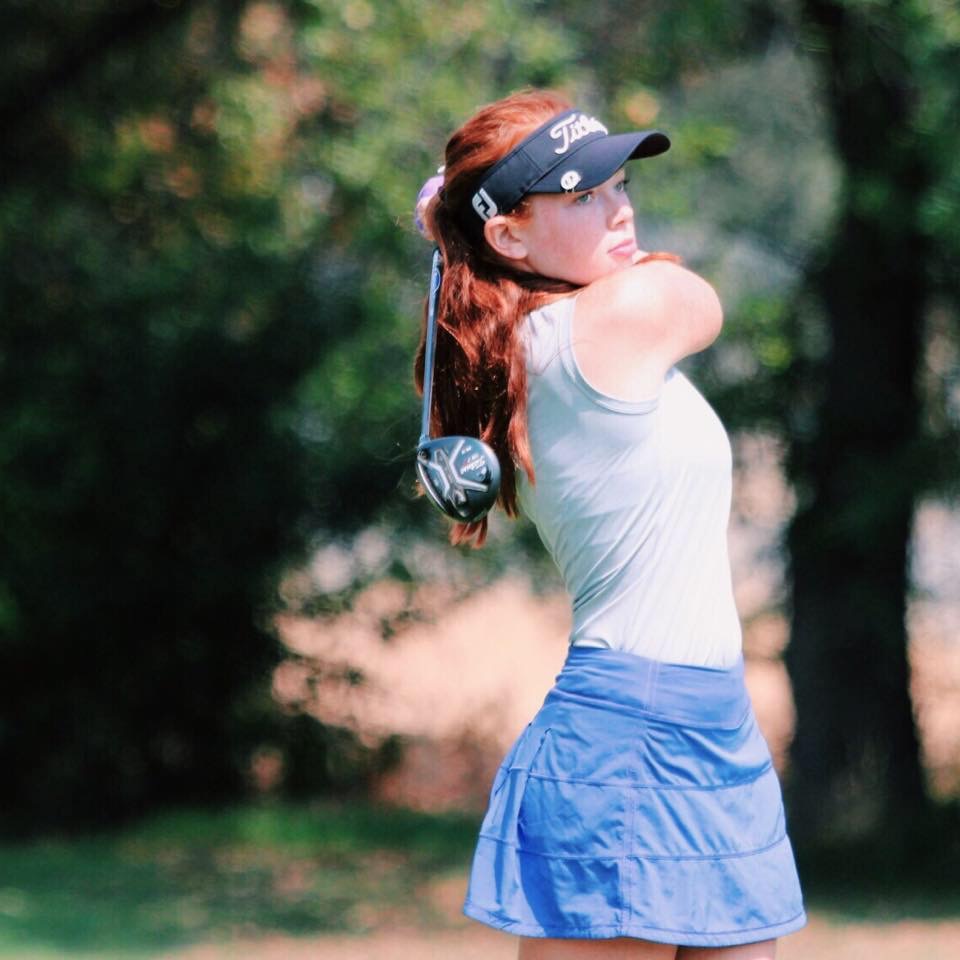 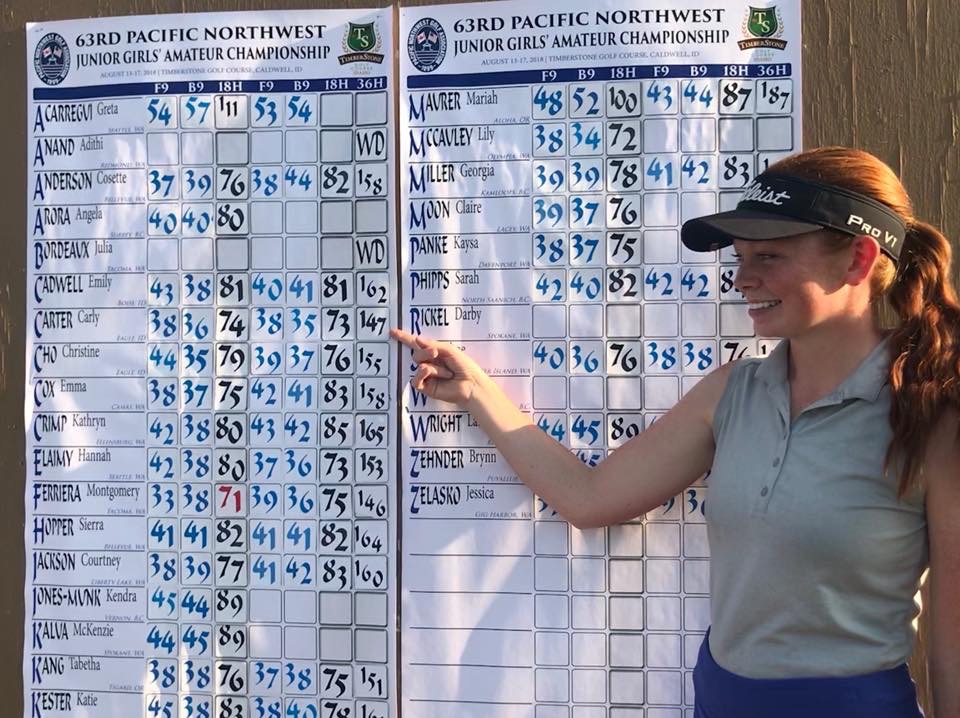 Congratulations to Carly Carter and Jake Slocum for their recent fine tournament play.

In the Pacific Northwest Golf Association Girls’ Amateur on August 13-17th, Carly posted rounds of 74, 73 for second place in the qualifying for match play. Carly lost on the 20th hole in the Quarter Finals of match play.

In an AJGA All Star at Butte Creek in Chico, California, Carly posted rounds of 71, 72, and 79. Carly was tied for the lead playing in the last group for the first time in an AJGA event. She moved out in front by two shots after making 6 straight pars in the front nine. Carly faced some adversity on holes 7, 8 and then on the back 9.  She ended up posting a final round 79 and finished in 3rd place. Carly learned to keep in the present and stay in the process of playing the shot at hand instead of thinking ahead to results. You either win or learn. She had a great learning experience.

In an AJGA at Eagle Crest Golf Course in Redmond, Oregon, Jake posted rounds of one under par 71 and 72. The third round was canceled due to extremely unhealthy air quality because of smoke so Jake finished T9.

Great way to wrap up a busy summer for these two.  Looking forward to Fall training! 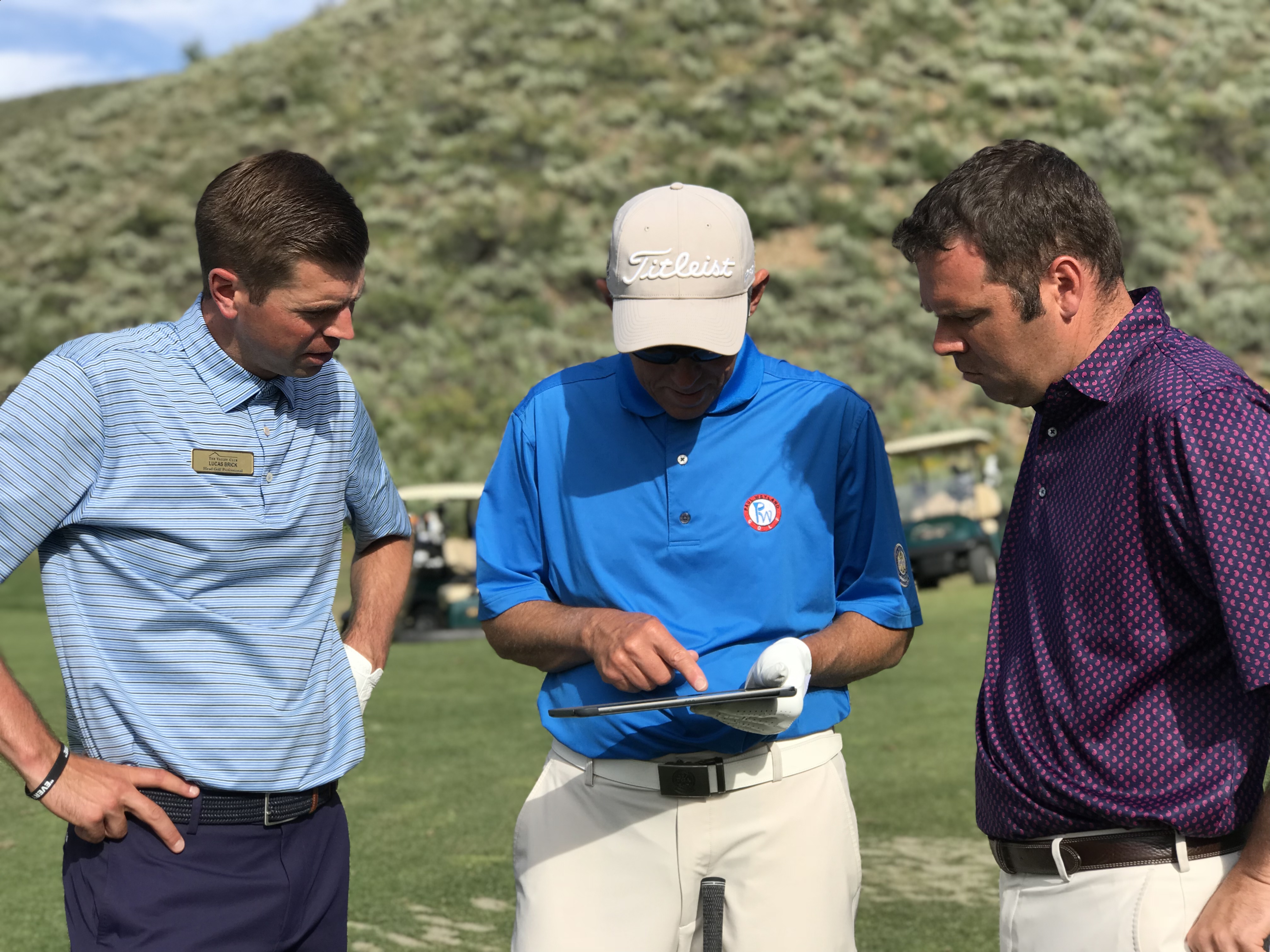 I spent time at  The Valley Club in Hailey, Idaho (near Sun Valley) with PGA Professionals Lucas Brick and Jaime Sharp helping them with their swings. Used K-Coach and TrackMan to measure and quickly noticed what was needed to improve their ball flight.

Lucas made significant increases in club/ball speed and peak height of his shots. He was into forward bend way too long into impact and very little right side bend. Took out some of the forward bend into impact and added some extension by having him the feel that he had his heart to the sky post impact like he was going to throw the club down the range. Immediate results.

Jaime made significant improvements in strike, lower dynamic loft, and face control. In transition his lead shoulder was moving up too early causing his torso and pelvis to early extend and the center mass of club dropped too far behind him. Got him to move his lead shoulder more forward and downward in transition and keep it down until hands were just below the waist. This gave him a feeling that he was covering the ball and his chest was more down and butt more back at impact. Much better strike, flight,face control, and increased ball speed.

Great work by both of you. Thanks for your hospitality and see you again soon!

Also did a little fly fishing on the Big Wood River.  This time of year is the Green Drake hatch.  The rainbow trout were eager for our flies, and we caught some really nice sized fish. 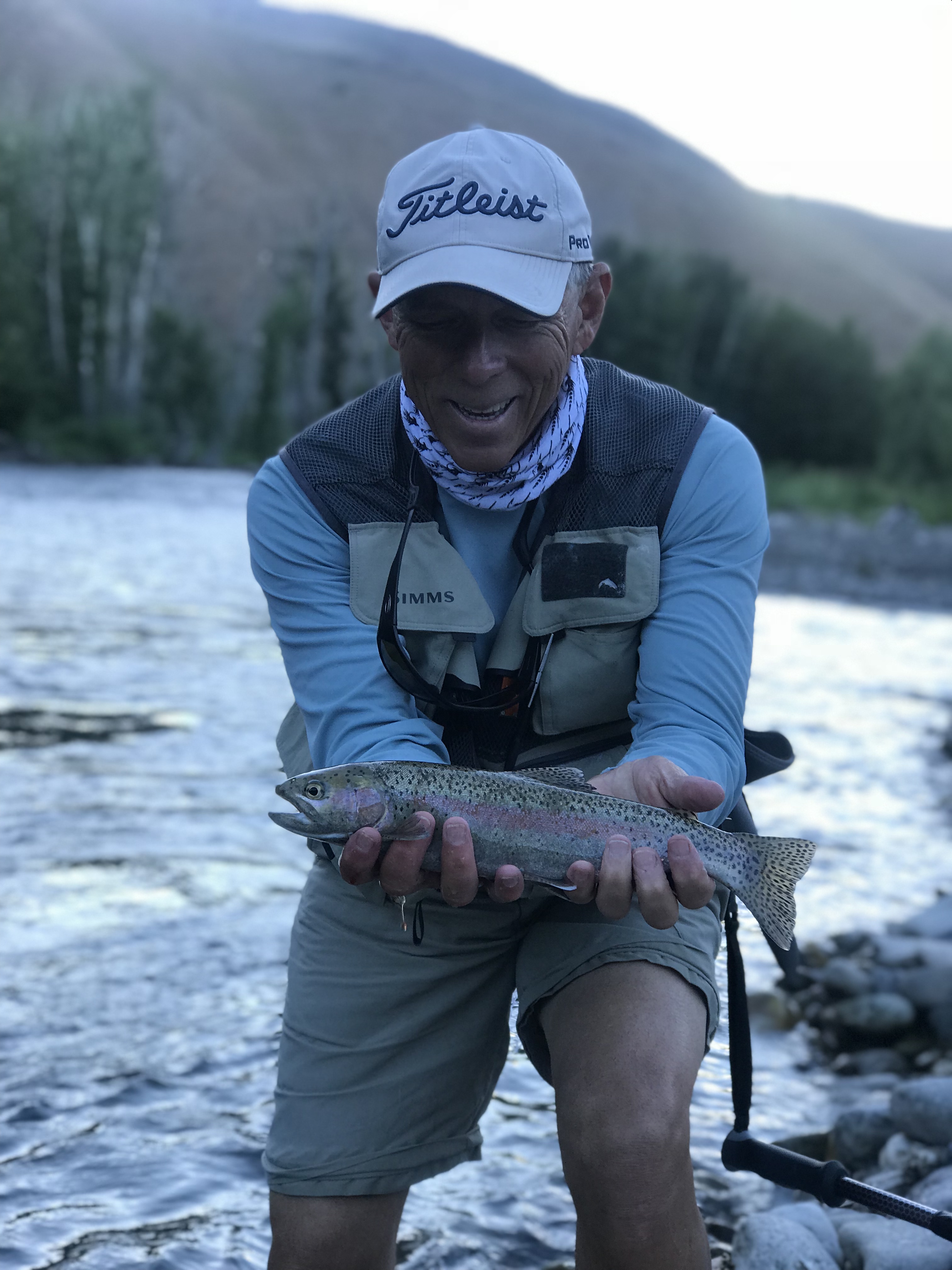 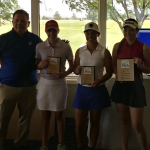 Congratulations to Carly Carter for qualifying for the 43rd Girls Junior PGA Championship to be contested at Kearney Hill Golf Links in Lexington, Kentucky on July 9-13th.

Carly’s game has really improved this year.  She played in the AJGA Mahoning Valley Hospital Foundation Junior All-Star tournament in June.  There were some challenging rainy conditions.  After struggling on the first day she fought back to make the cut by posting a 70.  The lowest round of the day.  On day three, she posted 75 for a three day total 225.

I love seeing her confidence grow, because she is just starting to understand how good she is!  Great playing Carly! 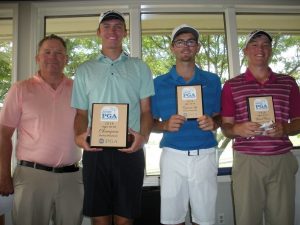 On day two, in windy conditions, Jake shot the low round of the day posting a 7 under par 65 for a two day total of 9 under par.  That put Jake in a sudden death playoff with Tidd for the second qualifying spot.  Tidd won on the 3rd playoff hole with a birdie to earn his spot with Barry.

Jake was very disappointed he didn’t qualify, but he proved to himself that when he needed to post a number to give himself a chance in a qualifier he could do it.  Very proud of Jake!

Carly struck the ball great on day one but putting kept her from a round in the 60’s. On day two, she had some distance control issues on approach shots, but she putted better and finished out a good round.

I am very proud of Carly for the hard work she has done on her game in recent months. Congratulations Carly!!

In the girls 5A tournament Christine Cho a freshman at Eagle High School led her team to the 5A State High School Golf Championship title. Christine had her struggles off the tee on day one and some putting issues the second day. However, she never gave up and managed to post rounds of 81, 77. She was medalist for her team and finished 3rd overall.

Christine was also named the Eagle High Athlete of the Year for Golf.   Congratulations Christine!!

In the boys 5A State Golf Championship sophomore Jake Slocum of Rocky Mountain High finished T4 overall and contributed to his team’s third state championship in a row.

The first day Jake faced a great deal of adversity posting an 80, one of his highest scores in the past couple years.  The second day Jake came back with a great 5 under par 67.

I am so proud of Jake for not getting discouraged and giving up. He went out the second day to post the best score he could. Jake showed me yet again his great character, tenacity and grit, things essential to play championship golf.  Congratulations Jake! 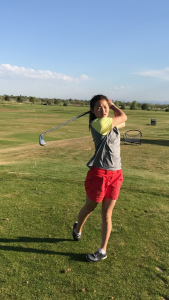 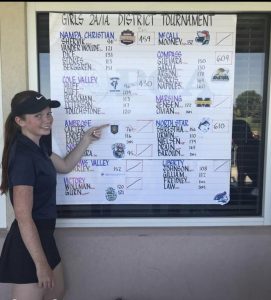 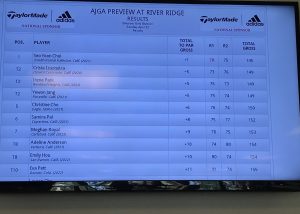 Christine Cho, a freshman at 5A Eagle High School, has had two first place finishes and a second, posting rounds of 74, 76, and 75 in three separate tournaments with large fields of twelve different high schools.

Christine led Eagle High School to victory in Districts posting a 77. Although struggling with her game that day, she still finished T2 overall.

Christine also played in her first AJGA Preview in California and finished 5th place with rounds of 76,74. It was a tight leaderboard, and Christine came to her final hole needing par for second place on her own. She faltered on that hole making a double bogey. Christine learned a valuable lesson as she got to thinking about results instead of the shot at hand and what her target was. A mistake she said she won’t make again. We will see😊

Carly Carter, a freshman at 1A/2A Ambrose High School, posted a 76 and won the girls Idaho State 1A and 2A Districts Golf Championship by several shots. Carly has won every high school 2A tournament posting rounds in the 70’s. Carly has been working hard on all aspects of her game and is improving all the time. She will be playing as an individual in the 1A/2A State Championship!!

Congratulations to Carly and Christine!  Off to State Championships – – Play well and have fun! 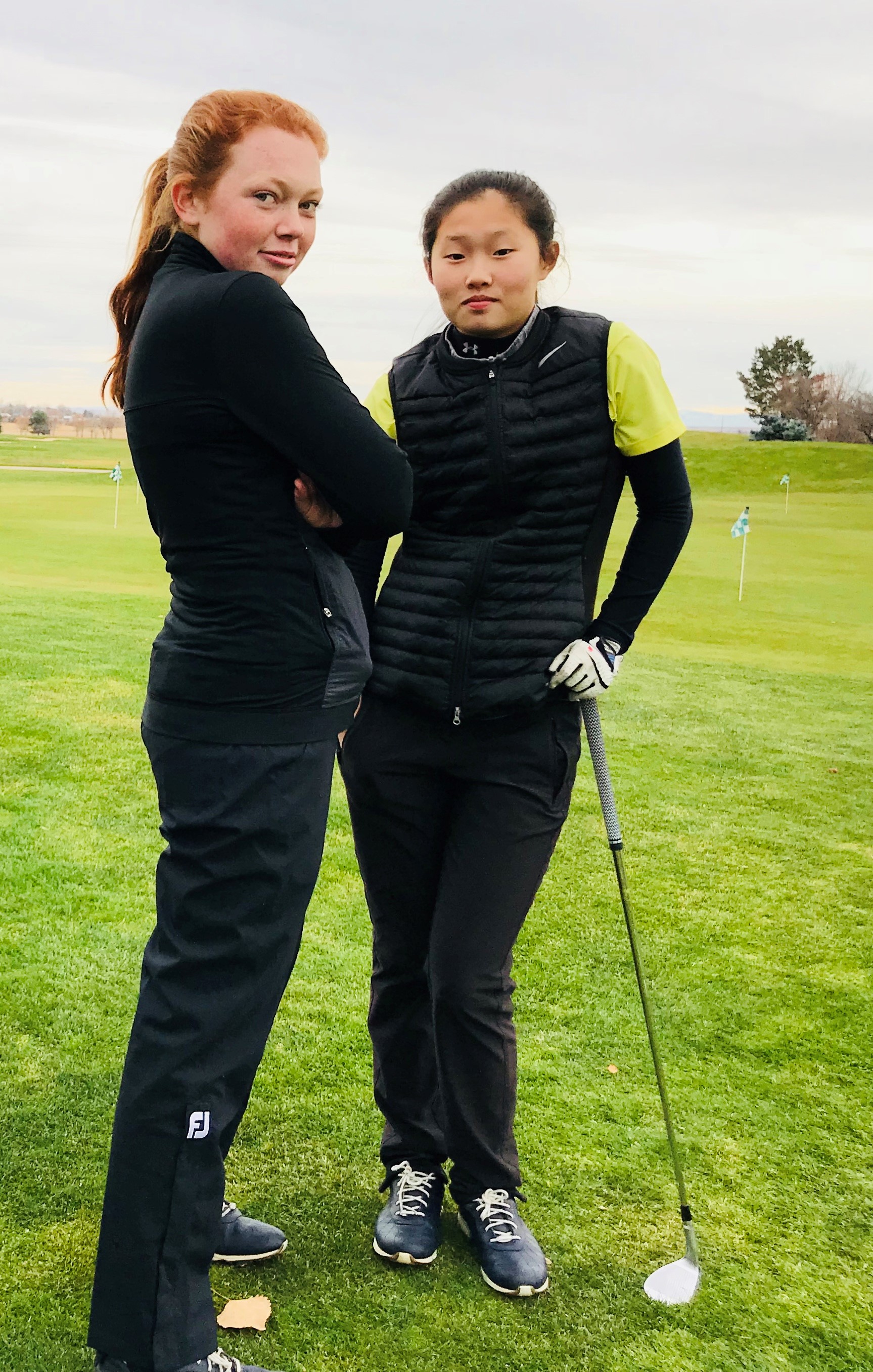 Congratulations to Carly Carter and Christine Cho who were selected for the Idaho Junior Tour Travel Team to play in the North Pacific Junior Ladies golf tournament.  This event, administered by the Oregon Golf Association, is like the Curtis Cup Matches for Amateur women which is known for friendly competition between the United States, Great Britain, and Ireland.  This year the event will be held on May 25th-27th at Rock Creek Country Club in Portland, Oregon.

Carly and Christine have participated in my elite junior golf academy, since they were 12 years old.  Both are now freshmen in high school and have progressed into my Strive for Excellence program.  This program is designed to prepare them for the demands of college golf.  Juniors aren’t just coached on swing mechanics in this program.  They are required to participate in a golf specific fitness program which is managed by fitness professional, Casey Crowell.  They are taught about accountability and taking ownership of their game through various assignments such as goal keeping, journaling their practice, and recording their tournament stats.

I am very proud of Carly and Christine.  They are not just incredible players who have no limits to what they could accomplish in golf.  They are, more importantly, fine young women who will be outstanding representatives on Team Idaho in the Idaho Junior Tour Travel Team (as freshmen)!